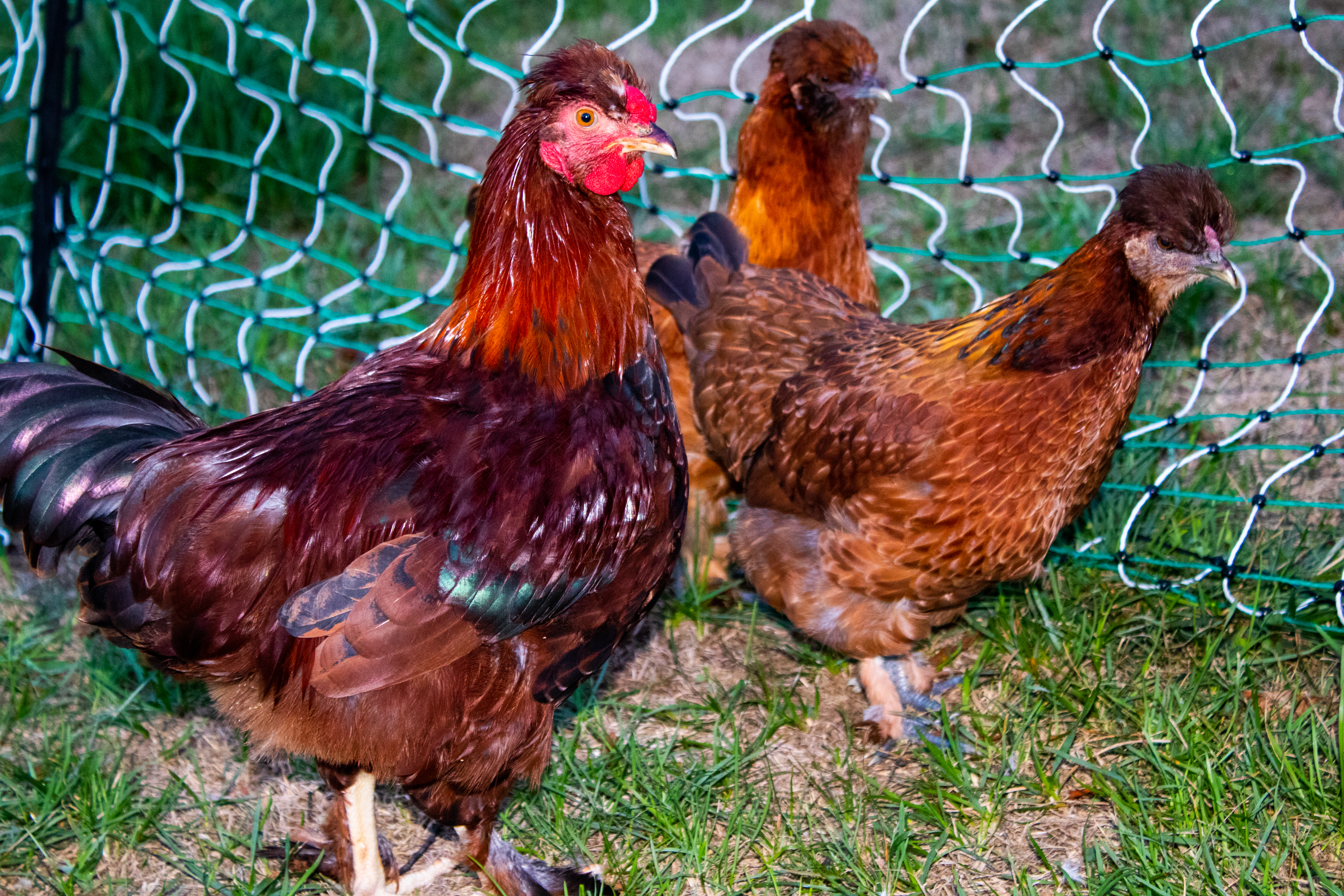 The Silkie chicken is prized for it’s unique temperament and black skin/bones. A breed native to China, the Silkie is prized for its fluffy feathers and unique soft, fluffy hair-like plumage. Despite it’s fluffiness, the Silkie has a surprisingly good egg production while also being an excellent mother. Silkie chickens have long broken my heart as they have a very ‘pet’ like temperament yet are not great at avoiding predators with their temperament and crest obscuring their vision to blame.

The Rhode Island Red is a popular dual purpose breed with a very strong ability to avoid/survive predators on small farms, thus making it an excellent choice for a backyard chicken. They are notorious for their large size and good egg production making them a great choice for small farms. The Rhode Island Red’s temperament is typically very skittish at first; but you can gain their trust over time.

The two breeds are almost polar opposites; a skittish, dual purpose chicken and a friendly ornamental chicken. F1 crosses of this breed showed a lot of potential for the market and homestead.

I chose a very high egg producing female Rhode Island Red (2018 – 305 eggs, 2019 – 298 eggs) with a nice form and high survivability (she was the only chicken that escaped no matter what, I swear she would escape from Alcatraz) . The rooster was a White Silkie raised in New York until I bought him at Root’s Country Market Auction in Lancaster PA. He had a calm temperament, small-medium comb, and was a standard Silkie by all accounts.

Both females had RIR feathers and size along with silkie skin, crest, and temperament. Eggs were medium/large brown on a regular basis like the Rhode Island Red. Unfortunately, no long term egg data was able to be collected as predation problems resulted in the loss of both pullets. The Silkie temperament and crest of the birds may need to be selectively bred out if I want to continue to raise these birds on open pasture instead of a closed solution such as a range coop; the crest appears to hinder the bird’s ability to see aerial predators.

F2 and backcrosses have been made; however, right now this chicken is not ready for production. I believe the Rhode Island Red and the Silkie crossed can create a great chicken for the homesteader as a dark skinned, high producing bird could cater to specialty markets. I am going to continue to look into and refine these genetics focusing on the health of well being of the bird on pasture as well as suitability for the homestead.